Basingstoke and Deane Borough Council’s next meeting, on Thursday 16th July (agenda at https://democracy.basingstoke.gov.uk/ieListDocuments.aspx?CId=143&MId=1714  ) , has a motion before it, “Climate Emergency SPD” (agenda item 17), which BTN would like to see passed.  This motion asks the Council to consider fast-tracking a “Supplementary Planning Document” (SPD) to outline the measures that the Council expects for new developments to achieve net zero carbon, with a response in six months.

BTN asked for a climate emergency SPD at February’s Council meeting, but was brushed off with the response that it would take 18 months and by that time the Local Plan Update would be well on the way (due in 2023 at the earliest).  Since then the climate emergency has only increased, with predictions of 1.5 deg C warming before the 2030 net-zero target set by the Council’s climate emergency strategy.  Also we have seen, at local and national level, what government can do when it really appreciates that there is an emergency!

We don’t want to be brushed off again, so we need everyone to:

(1) Email or otherwise tell their Councillor you want this motion passed (go to https://www.basingstoke.gov.uk/participation to find your local councillor’s contact details);

(2) Watch the Council meeting online – the virtual equivalent of packing the gallery https://www.basingstoke.gov.uk/webcast;

(3) Submit a query to the meeting (by Tuesday 14th) https://www.basingstoke.gov.uk/content/page/61541/Public%20participation%20at%20Council%20meetings%20-%20October%202018.pdf  and email your question to democratic.services@basingstoke.gov.uk addressing your query to Cllr. Mark Ruffell, e.g. What is the Council doing about the most recent global warming forecasts that it’s going to be worse than we thought https://www.theguardian.com/environment/2019/feb/06/met-office-global-warming-could-exceed-1-point-5-c-in-five-years?  Why hasn’t the Cabinet pushed through an emergency SPD months ago? How is the Council going to overcome the lack of commitment to carbon-neutral in the existing Local Plan?  How is it going to ensure that the carbon footprint of Manydown https://www.basingstoke.gov.uk/rte.aspx?id=298&task=View&itemid=9746 and all the other new housing developments doesn’t negate the carbon reduction achieved so far? (if you ask about Manydown add Cllr. John Izett’s name to Cllr. Ruffell’s as the target). 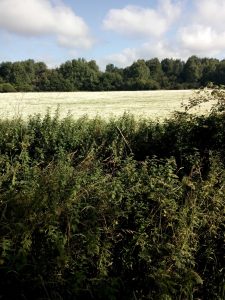 You will be aware, as we are, of the need to start acting on the declaration on the climate emergency that Basingstoke and Deane Borough Council made in July last year. In their declaration the Council promised to work with local people to bring us to “net-zero” by 2030.

We are fast approaching the first anniversary of the declaration; yet little seems to have be done in terms of action to reduce the greenhouse gas emissions that are causing the emergency.

Basingstoke Transition is a group of local volunteers that wants to build awareness of, and take part in, actions to reduce our emissions. We have spent much of our time trying to engage with cabinet members responsible for developing our plans to mitigate the impact of the emergency. We feel we are having only limited success.  Despite many emails and meetings, despite attending committee meetings and full council, we can see little (or no) concrete actions to address the immediacy of the emergency.  The Council’s main response to date has been to start a process to revise the Local Plan. However, this process is not due to be completed before 2024 at the earliest.

We think this is too little and too late. BTN experts have written a brief report (Initial Contribution to Local Plan May 2020 Final ) on what is causing the climate emergency in Basingstoke and how we might respond to it.  It provides a baseline of where the borough is in terms of its greenhouse gas emissions, how that has changed since 2005 and what the main causes are of the emissions. It then goes on to make suggestions on how the borough can start moving towards its “net-zero” by 2030 target.  All the data in the report are sourced from national statistics and are fully verifiable and have been produced by experts on climate change.

Update 5/4/20 We are meeting by Zoom for our First-Tuesday-of-month business meetings, starting Tues 7th April 2020 – please email secretary <at> basingstoketransition <dot> org if you want to “attend”.

Here is a link to the 2020 Coronavirus Act – which gives the government a lot of power to modify the workings of local government by regulation (without parliamentary scrutiny).

BTN wants to protect its members from infection, but we are also aware that the need for “transition” is not reduced in the long term by the effects of the current situation.  We’ve had to cancel our AGM, planned for 5th May.  We hope to continue our monthly business meetings on the first Tuesday of the month by teleconferencing – watch this space.

The Borough Planning and Development Committee meeting on Tuesday 24th March, which was meant to hear the Manydown outline planning application, was cancelled.  The plans under consideration had been drawn up before the Council declared a climate emergency, so we had written to the committee (BTNtoBDBCDevelCtteeMarch2020ManydownFinal223k) expressing our concern.  We have been advocating a Supplementary Planning Document (SPD) (mheathtomruffellSPDforclimatechange81k) to enact the provisions of the climate emergency declaration in the current Local Plan.

We were engaged with the Council in planning Green Week 2020 for 19th-26th September and we’ll let you know when we know more about this.

The government is consulting on its “Future Homes Standard”, with deadline 7th February – see https://www.gov.uk/government/consultations/the-future-homes-standard-changes-to-part-l-and-part-f-of-the-building-regulations-for-new-dwellings

The London Energy Transformation Initiative (LETI; https://www.LETI.london) is highly critical of the Future Homes Standard, and is urging us to write to our MPs to complain about the worst aspects.  It has produced a package including a draft letter to MPs, which you can download from https://www.leti.london/part-l (that’s an ell not a one at the end).  (This comes as a Zip file).

LETI’s concerns are, in order of relevance to BTN:

1. The FHS will remove local authorities’ ability to set higher standards than the national standard for buildings – this would put paid to making Manydown a national example of a low-carbon village;

2. The FHS wants to do away with the current requirement on house fabric (“Fabric Energy Efficiency Standard”). This means that a contractor can rely on the heating method being low-carbon rather than building a high-standard fabric – so a new house is welcome to spew heat worse than present standards, provided that heat has been generated by low-carbon means; and it doesn’t include monitoring for the lifetime of the building or any incentive to the users to maintain efficiency;

3. It doesn’t include whole-life emissions (choice of construction materials and methods, and disposal);

On no. 2 the government is aware of the likely abuse, and proposes to uplift standards for individual elements (walls, windows, etc.). LETI says that the uplift isn’t great enough to prevent the abuse, and proposes a stringent new standard for reduced energy loss through walls etc.

I’d also comment that the government needs to up its game in low-carbon energy generation and carbon-capture-and-storage if it doesn’t insist on a high standard of insulation. That isn’t covered by the FHS.

One more item not mentioned by LETI (presumably because it doesn’t apply in London) is the removal of a concession for carbon-intensive heat sources in dwellings off the gas grid, i.e. LPG, heating oil and coal. This will force builders to make rural homes of higher standard than urban ones.

Something that looks positive is a new “technology factor” to upweight connection of a house to a district heating network. No good if this allows the builder to get away with less insulation, of course…

There’s still time for you to make a personal response – see https://www.basingstoke.gov.uk/priorities for online form and all the supporting documents.

The budget bottom line is grim, though: a £5M deficit is the forecast for 2024, which makes it difficult for the Council to be as ambitious as we’d like.

We had a successful hustings at Christ Church Chineham on Thursday.  All five candidates came and answered questions put beforehand and from the floor.  The meeting was recorded – please go to

Questions received, not all of which were put because of time constraints, are here. 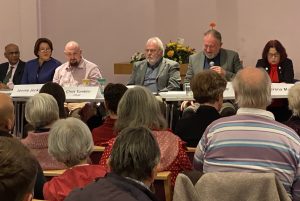 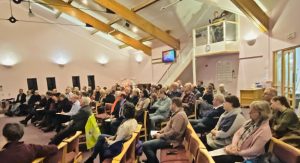 PLEASE SUBMIT QUESTIONS IN ADVANCE TO:

Basingstoke Transition Network exists to encourage the transition of the Borough to a low-carbon, low-waste community that encourages biodiversity and seeks climate justice.

Below is a link to a poster/flyer you can use for publicity:

Basingstoke Transition Network poses these questions to candidates for the election on 12th December 2019.

Important: if you want more information about voting (registering, applying for postal vote) go to https://www.basingstoke.gov.uk/general-election-2019 )

1(a) What is your view on the causes of air pollution in the Borough and the UK as a whole?
1(b) What steps would you take as an MP to reduce pollution?

2. Energy
Basingstoke and Deane Borough meets only 1.8% of its energy needs from local renewables; Hampshire as a whole meets only 1.5%. The national target is 15% by 2020: this is also the target in the borough Local Plan.
2(a) How do you think the target should be reached, locally and nationally?
2(b) How will you engage with the public, business and government to reduce pollution and increase renewable energy production?

3. Climate change
Keeping average global warming to 1.5 degrees C will safeguard our planet from the worst effects of a 2-degree warming, but needs a 45% cut in global carbon emissions by 2030 and net zero emissions by 2050. The government needs to revise the current long-term policy accordingly.
3(a) How will you personally set an example of reducing your carbon footprint?
3(b) How will you raise public enthusiasm for the big lifestyle changes needed across the Borough to achieve the likely national target?
3(c) How will you prepare for the effects of climate change so that they do not hit
poor and disadvantaged people both in the UK and worldwide disproportionately?

A conference for local climate action groups on Saturday 16th November 2019 at the Institute of Education, University College, London.

It is, apparently, free.

Basingstoke Green Week 2019, brought to you by BTN, Basingstoke and Deane Borough Council and partners, has an exciting programme starting on Saturday 21st September with stalls in Castle Square, The Malls, and ending on Monday evening 30th September with Cafe Scientifique, “Treatment for an enlarged carbon footprint” (7.30 pm, Tea Bar).

The programme is here: GreenWeekprogramme2019-10Mb.

And it’s time to think about leaving the car at home on Car-Free Day, Sunday, 22nd September – and give the flyer GW2019 Sun 22nd Sep Car Free Day V4 to your friends (btw if you are thinking of taking your car to London on that day, check https://londoncarfreeday.com/ ).

Finally, give some thought to One World Week  which this year has the theme “Climate Changes Everything – Now is the Time to Act”, and runs from 20th to 27th October, a month after Green Week.  Can you/your group/your class/your organisation do anything for it?