The subject of “Place” or Place Shaping” was a topic for open discussion at the latest meeting of Basingstoke Transition. The first consultations on Manydown when the project was first launched several years ago involved a company called Beyond Green to bring ideas and lead public consultation. From my recollection, there was quite a lot of agreement in the meetings I attended that the dominance of cars in street scenes should be diminished to create more informal greener spaces for walking, cycling and greater informality in which people might sit and walk and children play. We subsequently learned that such proposals were hampered by B&DBC Councillors certainty that the approach would never be accepted by people in Basingstoke. Cllrs insisted that residents had to be able to drive to their homes and park cars so that they could step out more or less straight into their houses. While we still have to see the final designs for homes on Manydown, and we may be pleasantly surprised, the question remains, can we improve the way we design new communities to make them better for the people who live there?

Without over indulging in a critique of existing “place making” design the dominance of the car in recent decades is very obvious. It was interesting in the discussion that examples were quoted of parts of Brighton Hill and other parts of central Basingstoke where developments prevented residents from parking cars outside their homes but required them to use communal garage areas. Other examples were quoted including old parts of industrial Leeds where terraced houses on opposite sides of a street were pedestrianised in front of the houses and with a green space with trees down the centre. I can think of a similar street in Winchester. In other northern towns there are more examples of old not new streets being pedestrianised and traffic being required to park at either end.

As examples of a more modern approach reference was made to Poundbury, a consequence of Prince Charles being interested in “place”, sustainability and “communities”. Some people will disagree but Poundbury has many supporters and it doesn’t ban cars from its streets. A new project by the Duchy of Cornwall is Nansledan. This too offers a very different image of a community from the dominant experience in Basingstoke. One other notable difference seems to be the quality of the builders allowed to build, a far cry from the builders whose names dominate the mass house building industry.

Discussion in the group was wide ranging with some agreeing that the Basingstoke dependence on cars would not be easily broken. Others pointed out that Cllrs still hold to the same view and were still insisting on the same thinking that informed their views on Manydown. Another view was that a small development would trial some of the ideas on “place making” that hitherto have not been entertained, on the principle that there must be some people interested in a different approach to place making, after all Poundbury has been a success and Nansledan is well on the way. Village Makers (connected with the Living Villages Trust) have been engaged in innovative design and “place making” for several years and it is worth taking a look at community designs on their webpage. These ideas may be on a smaller scale to the estates that are commonly built but surely we need to encourage more innovation and quality in design? 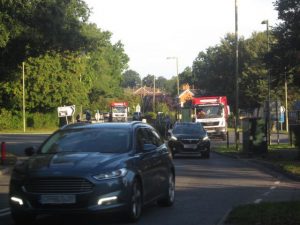