UPDATE – we received a formal reply to the collective letter sent to Hampshire County Council.  The reply, dated 7th September 2020 and from the Climate Change Team, states that the Council will not move the target date for carbon neutrality forward from 2050, because it does not want to promise what it can’t achieve, particularly in sectors where it might have limited direct control.  It cites the national Committee on Climate change, which states that “for most sectors 2050 currently appears to be the earliest credible date”.  It intends to utilise changes in national policies and the funding available between now and 2050 to achieve change in these areas.  It says it is making progress to a 2025 target for a 50% reduction in emissions for its own estate, and that “actions which have co-benefits will be prioritised, such as improving air quality”.

Hampshire County Council is considering its Climate Emergency Strategy.  The 2050 deadline for carbon neutrality had already been called into question – see

https://democracy.hants.gov.uk/ieDecisionDetails.aspx?ID=1359in which it is noted that the County Council  has an ambition to bring the target forward “if this is practically and financially achievable”.

On 29th September it will be agreeing its action plan.  We all know 2050 is too late – the IPCC said over a year ago that we have twelve years, i.e. until 2030, to get measures into place to keep global warming below 1.5 deg C, and since then the predictions have got worse.    So we are urging Hampshire residents to write to their County Councillors urging them to bring the deadline forward to 2030, or sooner.

Here are the bones of a letter: copy and paste into your email or word processor and personalise it if you can, e.g. what nightmares have you had from the heatwave, how close your house is to sea level or a flooding zone or a forest that could be hit by wildfires, or how much your health is suffering from air pollution.

We welcome the decision of the County Council to declare a climate emergency and approve a climate strategy and, shortly, a climate action plan.

We remain seriously concerned that the County Council continues to set a target date of 2050 to reach zero carbon.  The science has changed since July 2019 when you made the declaration.

Here are ten reasons for you to review the 2050 deadline:

(we attach references, in Appendix 1.)

Your strategy includes much to be proud of, but if Hampshire aims to be a leader in the fight against climate change, revising the net zero target to 2030 is essential. Many local authorities, including some led by Conservatives and including county councils, have a target of 2030.

We have a unique opportunity post COVID to build back better – to create jobs, clean up our environment and make Hampshire a leader rather than a follower.

Before the action plan is brought to Cabinet for approval in September, please review your deadline.

Migration due to climate change 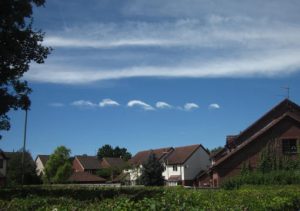